Timeline for the Transy Seal 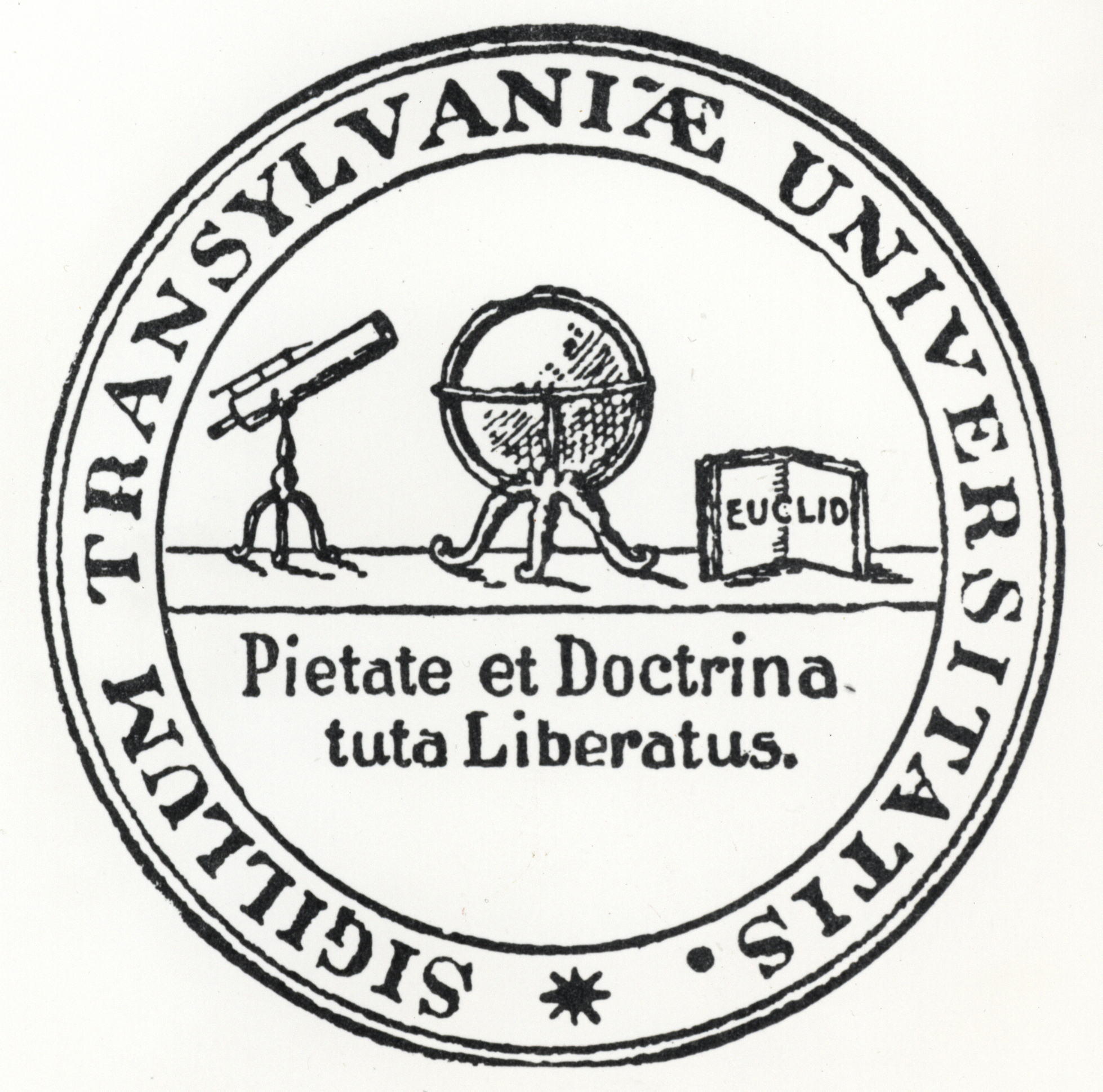 According to the 1805 Board of Trustees minutes, a committee was formed to "procure a Seal for this University, with such device as they may think proper immediately and draft credentials expressive of the object of this mission."

A note [1808-U-10] from early TU documents states that Alexander Frazer was entitled to ten dollars for cutting a seal for the University. April 6, 1808.

Robert Peter quotes the April 7, 1810 Records of the Trustees of Transylvania University in his History of Transylvania, page 68. "The seal hitherto used in attestation of the publick acts of the Trustees of the Transylvania University, shall be the seal of the Corporation.  The device and motto of the same being as follows: Device: a Globe and Telescope mounted on their stands, and a book displayed open, inscribed 'Euclid.'  The Motto underneath, 'Pietate et doctrina tuta liberatus,' encircled by the inscription, Sigillum Transylvanae Universitatis.' "

An 1823 affidavit by Peter Eltonhead states, "I Peter Eltonhead of the county of Woodford and the state of Kentucky being first duly sworn, do testify and say that being in the employment of Thomas Stedman in the year 1819 or 1820 made for Transylvania University, one Stamping Press for the seal of said institution..." 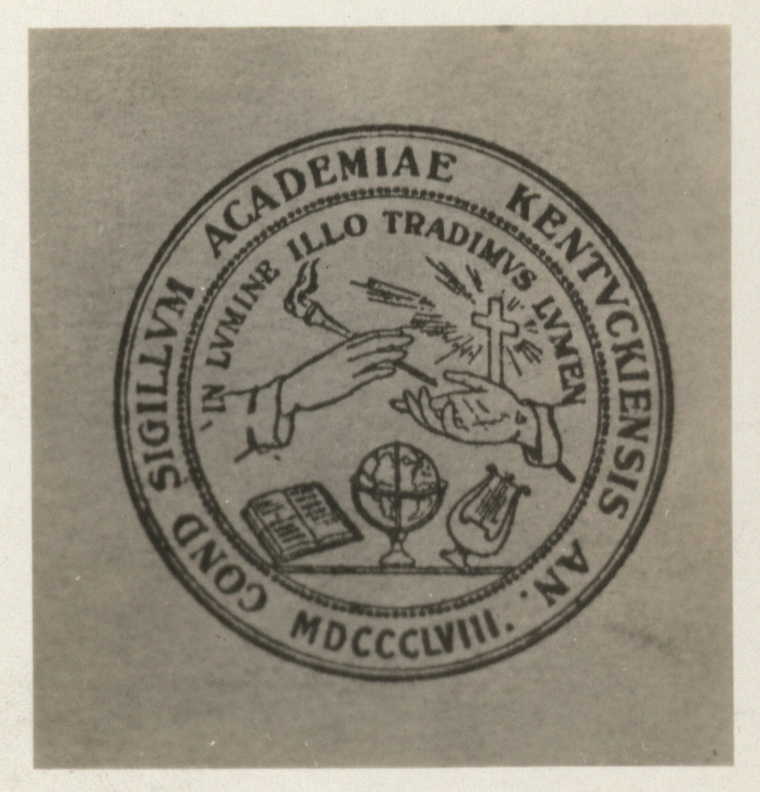 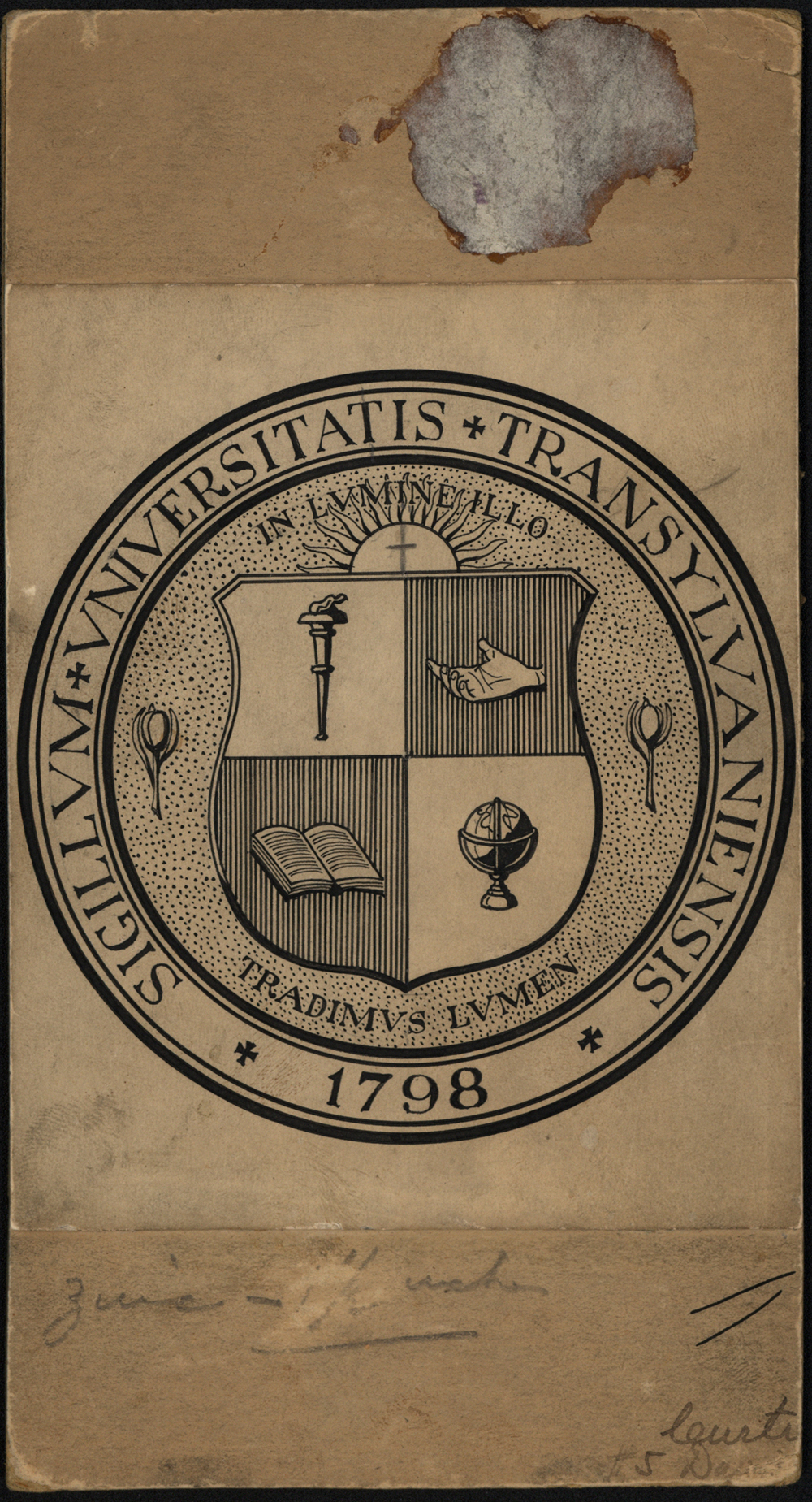 In 1908 the name of the institution was changed from Kentucky University back to Transylvania University. This is the original drawing of the seal created by student Curtis Fox in 1908 for the newly renamed institution.

According to notes of the Executive Committee of Transylvania University of January 6, 1909, "The committee appointed to design a new seal for the University reported with the design and it was approved, and is described as follows: - 'The seal is a circle symbolic of perfection.  It has this inscription around the margin which preserved the name of the Institution and the date of its first charter 1798.  Within the circle is a shield supported, to the left and right by two  tulips, the Crimson tulip being the University flower; and supported by a sun, symbolic of all truth. Above the sun and below the shield is arranged the motto of the institution - In Lumini illo Tradimun [Lumen] - the shield itself is quartered.  In the upper left quarter is an upright torch lighted; in the upper right quarter a hand extended. They symbolize the transmission of learning from the alma mater, whose torch is lighted at the sun of truth, to the extended hands of her sons and daughters.  The lower quarters symbolize the scope of the curriculum, the Arts, an open book in the lower left quarter, and the sciences, a mounted globe in the lower right corner."

These three seals are the seals of Transylvania University, Hamilton College and The College of the Bible from the 1914 yearbook.

The Institution's name was Transylvania College from 1916 to 1969 although it appears that the seal remained the same, stating "Sigillum Universitatis Transylvaniensis" around the outer ring.  We can see the seal designed in 1908 being used in the Rambler student newspaper in the Sept 19, 1965 (see page 2).  A new interpretation of the seal, pictured below, was presented in 1970. 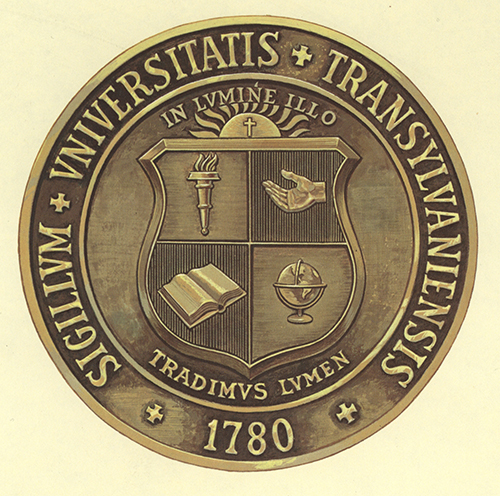