Search all Medical Theses
at the Kentucky Digital Library site 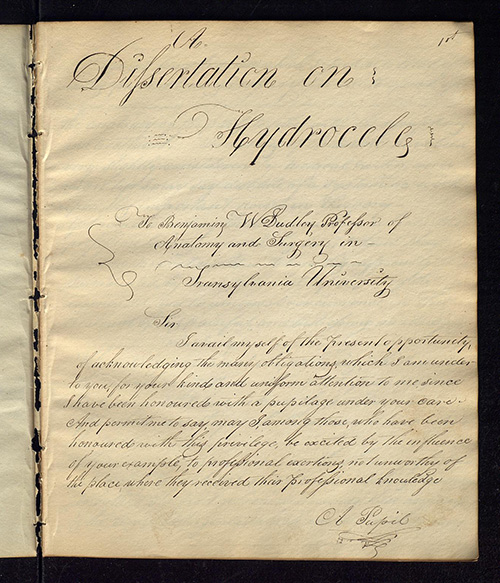 The Medical Thesis was written at the culmination of the Medical degree at Transylvania.  Although not all students wrote one, we have more than 1800 theses in our collection written between 1819 and 1859.  Each one is hand written in the approximate equivalent to the modern blue book. This collection has the potential to impact scholars’ understanding of 19th century medical and regional history.

1780 - Transylvania chartered by the state of Virginia (1780 Charter)
1783 - Trustees meet for the first time at Crow's station near Danville.  Ask for an amendment to the original charter. (1783 amendment to the Charter)
1784 - John Todd gifts the new school with a library and philosophical apparatus
1785 - First students take classes in David Rice's cabin near Harrod's Run between Danville and Fort Harrod.  Rev. James Mitchell, first "Grammer Master"
1789 - Todd's library and philosophical apparatus arrive in Kentucky
1791 - Rev. James Moore appointed "Director" or the first acting President of Transylvania Seminary
1793 - gift of lot in Lexington by the Transylvania Land Company which became the permanent location of Transylvania
1794 - Harry Toulmin named President of Transylvania
1796 - Kentucky Academy established by Kentucky Legislature; rivalry between Transylvania Seminary and Kentucky Academy ensues
1798 - Kentucky Academy and Transylvania Seminary merged by consent of trustees of both institutions and Act of the General Assembly of Kentucky under the name Transylvania University.  Consolidation was made under the original laws which governed Transylvania Seminary as enacted by the General Assembly of Virginia.
1798 - Rev. James Moore named President
1799, January - Trustees institute Medical Department
1799, October - Dr. Samuel Brown appointed Professor of Chemistry, Anatomy, and Surgery
1799, November - Dr. Frederick Ridgely appointed Professor of Materia Medica. Midwifery and Practice of Physic
1799 - Law College established with appointment of Col. George Nicholas
1804 - Rev. James Blythe named President of Transylvania University
1805 - Dr. James Fishback was made professor of the Theory and Practice of Physic
1809 - Dr. Benjamin W. Dudley appointed Chair of Anatomy and Physiology; Dr. Elisha Warfield to Surgery and Obstetrics; Joseph Buchanan to the Institutes of Medicine; Dr. James Overton to Materia Medica and Botany
1810 - Dudley leaves to further his education in Europe
1814 - Dudley returns to Transylvania
1815 - Medical School reorganized.  Dr. Benjamin W. Dudley, Professor of Anatomy and Surgery;  Dr. James Overton, Professor of Theory and Practice; Dr. William H. Richardson, Obstetrics, etc; Dr. James Blythe (President of the University), Chemical Instruction;
1817 - Rev. James Blythe appointed Professor of Chemistry, Anatomy, and Surgery
1817 - Dr. Daniel Drake appointed to the chair of Materia Medica and Medical Botany.  Faculty are now: Dudley, Anatomy and Surgery; Overton, Theory and Practice; Drake Materia Medica and Medical Botany; Richardson, Obstetrics; Blythe, Chemistry.
1817 - Degree of M. D. was first conferred
1817 - Dudley duel with Drake/Richardson
1818 - Drake resigns
1819 - Horace Holley appointed President
1819 - Dr. Samuel Brown recalled to chair of Theory and Practice of Medicine. Charles Caldwell appointed chair of Institutes of Medicine and Materia Medica.  Constantine Rafinesque lectured in Botany and Natural History
1821 - Caldwell goes to Europe to buy books and scientific apparatus with a budget of $17,000. Caldwell believes that he was able to obtain many important titles because the French Revolution removed them from the libraries of the noble houses of France.
1823 - Drake returns to Transylvania and the chair of Materia Medica and Medical Botany
1825 - Samuel Brown retires
1827 - Drake resigns
1828 - Transylvania Journal of Medicine first published
1829 - The University Building is destroyed by fire.  The fire destroyed much of the law library and the collections of the Union Philosophical and Whig societies. More than 1500 volumes went up in smoke along with papers.  Much of the Scientific Apparatus was saved.
1832 - Old Morrison is built on the north side of Third Street.  Also known as the main academic building.
1837 - Medical Department splits with Caldwell leading the effort and Yandell, Cooke & Short going to Louisville to start the Louisville Medical Institute.  Dudley, Richardson, Bush, Peter stay at Transylvania.
1839 - Medical Hall is built on the corner of Market and Church, according to Peter.  There is a historical marker for the building on the corner of 2nd and Broadway.
1839 - Peter and Bush go to Europe to buy books and medical apparatus with a budget of $11,000.
1850 - Dudley resigns and appointed Professor Emeritus.
1859 - Medical Department closes.
1863 - Medical Hall destroyed by fire while being used as a Civil War hospital.

Info derived from: History of the Medical Department of Transylvania.
and: Transylvania: Tutor to the West

About the Medical School

"During its first two decades of existence, the medical department was little known, but between 1819 and 1859 it achieved eminence nationwide. During those years virtually every state in the expanding nation sent students to Transylvania, some 4,300 in all, of whom 1,800 received M.D. degrees. More than 40 percent of the students were Kentuckians, and over 80 percent came from the slaveholding South and trans-Mississippi West.

Transylvania's medical department had an outstanding faculty, library, scientific apparatus, and natural history collection. In 1821 and again in 1839, faculty members traveled to the Continent and England to purchase books and medical and scientific displays and apparatus for the medical department. On his 1839 purchasing trip to Paris and London, Robert Peter, professor of chemistry, confidently wrote to his wife in Lexington that Transylvania would now be the "best equipped to teach modern medicine." Without effective state or national regulation, however, medical schools as local enterprises proliferated. In 1820 there were ten schools of medicine in the nation. By 1859 there were nineteen in the South alone, three of them in Kentucky. In 1837, after nearly twenty years at Transylvania, Caldwell persuaded half of the medical faculty to move west and create the Louisville Medical Institute. Transylvania granted its last medical degree in 1859."

Caldwell, Charles, 1772-1853. A Report Made to the Legislature of Kentucky: On the Medical Department of Transylvania University, February 15th, 1836. Lexington: Clarke, 1836.

Catalog of the Medical Department of Transylvania University, 1846-47.

Catalogs - A bound collection of catalogs of the officers and students of Transylvania University and theses, 1820-1826.

This is a bound collection of Catalogues of Officers and Students of Transylvania University. Contained within are lists of Presidents, Trustees, Faculty, Students, and Student Theses

Transcription of two letter from Medical student C. C. Graham to Robert Peter in 1876, containing his recollections of being a medical student in 1817-1819.