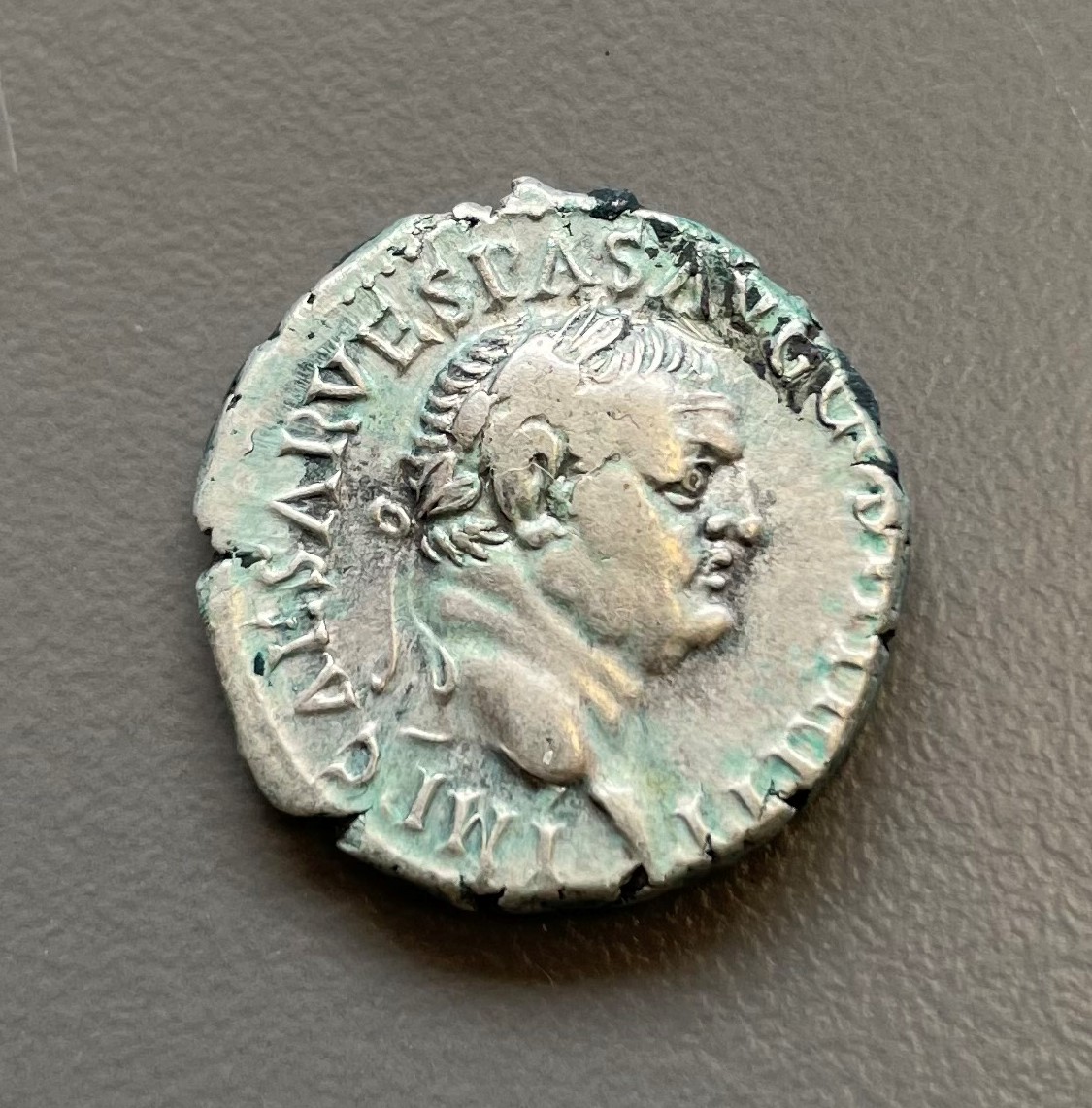 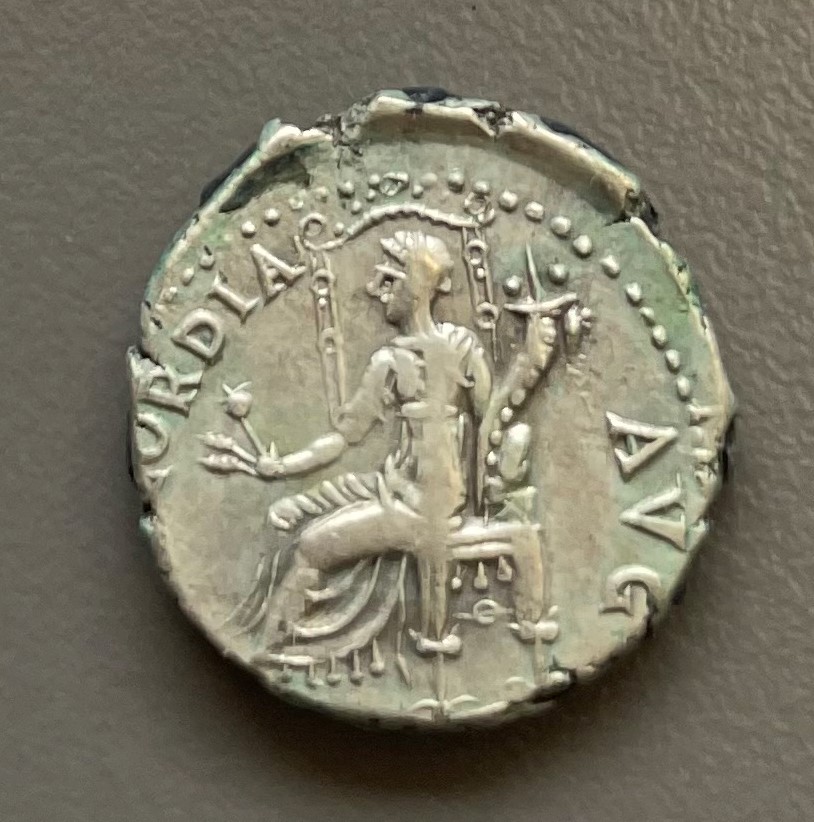 Vespasian was Emperor from 69-79 C.E. and established the second Imperial Dynasty, the Flavians. This particular coin was minted sometime around 71. The reverse shows a seated woman, with ears of corn and a cornucopia––most likely an image of the goddess Ceres. 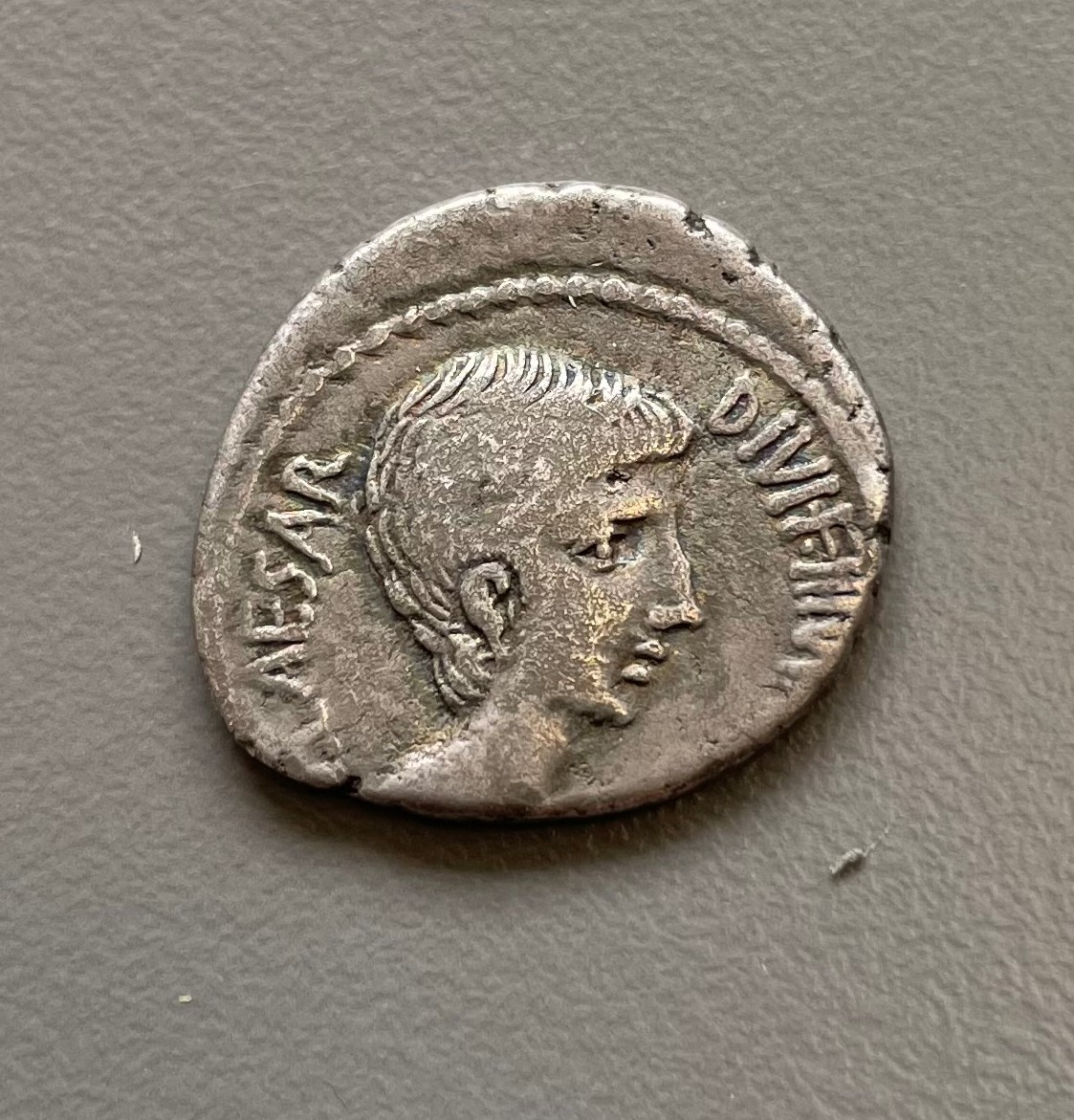 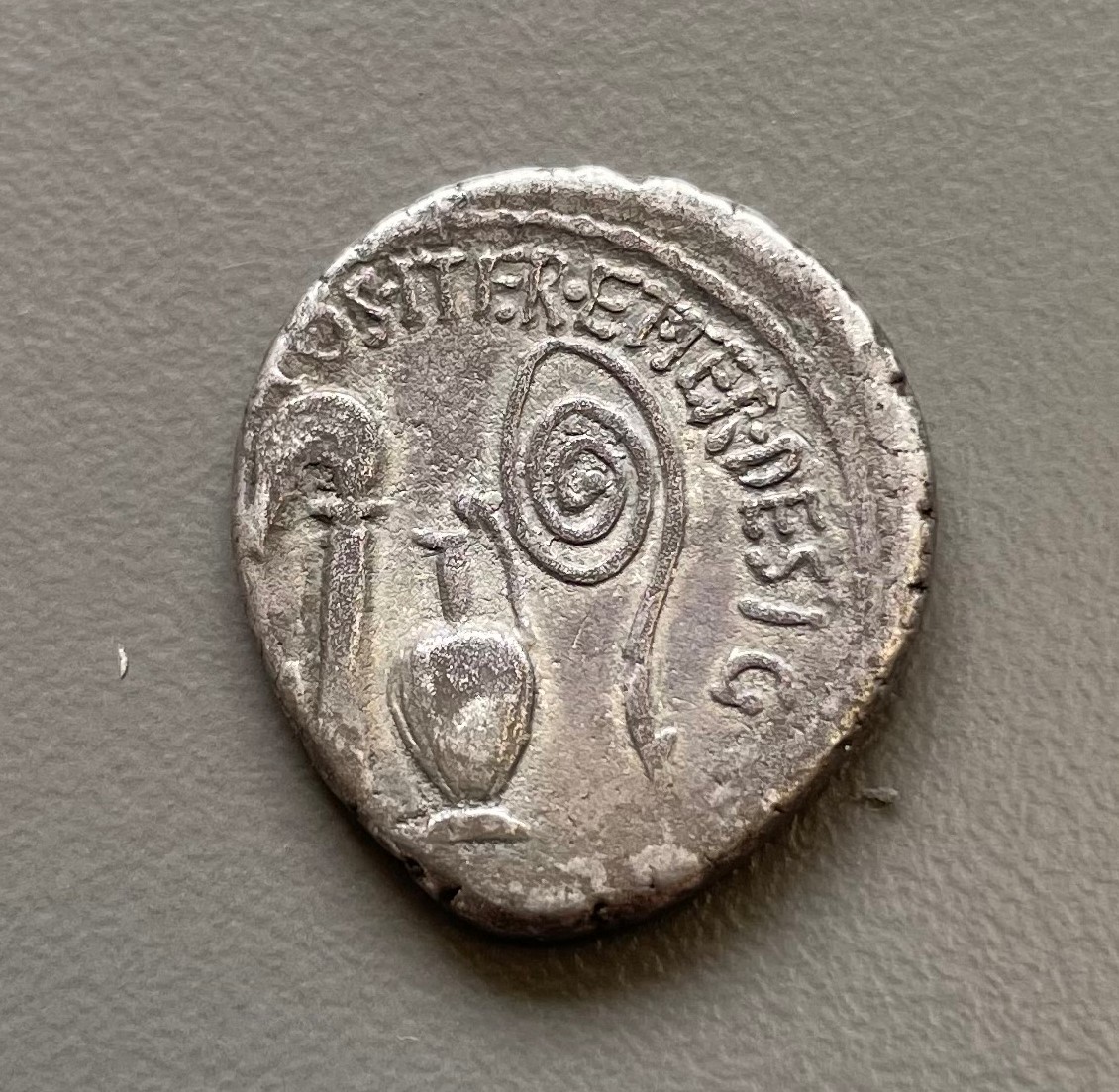 This coin was made in a military mint travelling with Octavian in c.37 B.C.E. Several interesting items are on display on the obverse, including ritual/priestly items of the simpulum and lituus. These items are common on coins of both Augustus and Julius Caesar.

A good exemplar of this very scarce and interesting issue, in VF+/VF condition, conserving complete details, including a nice portrait of Octavian, future Augustus. 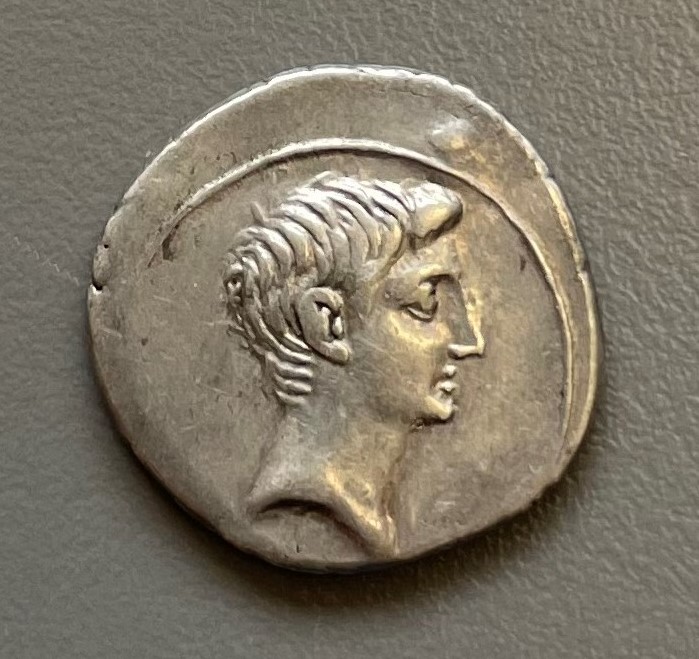 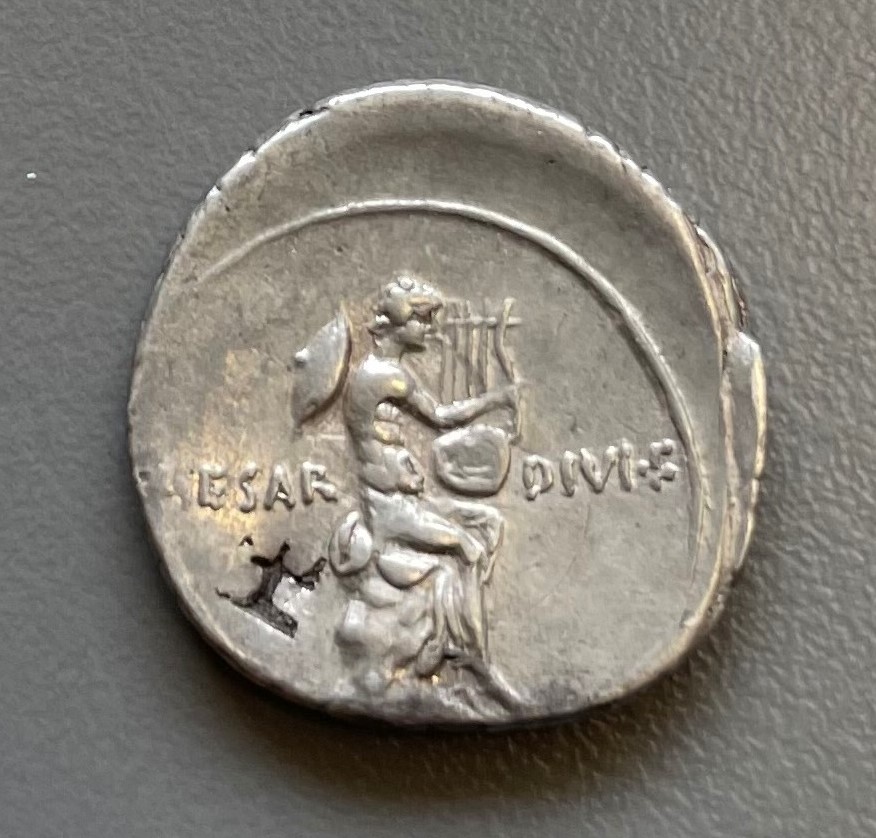 This coin, minted between 31-29 B.C.E., shows a bare-headed Octavian on the obverse. Octavian, later known as Augustus, is the first Emperor of Rome. The Reverse has either a portrait of Mercury or Apollo, known to us because of the presence of the lyre and the helmet. 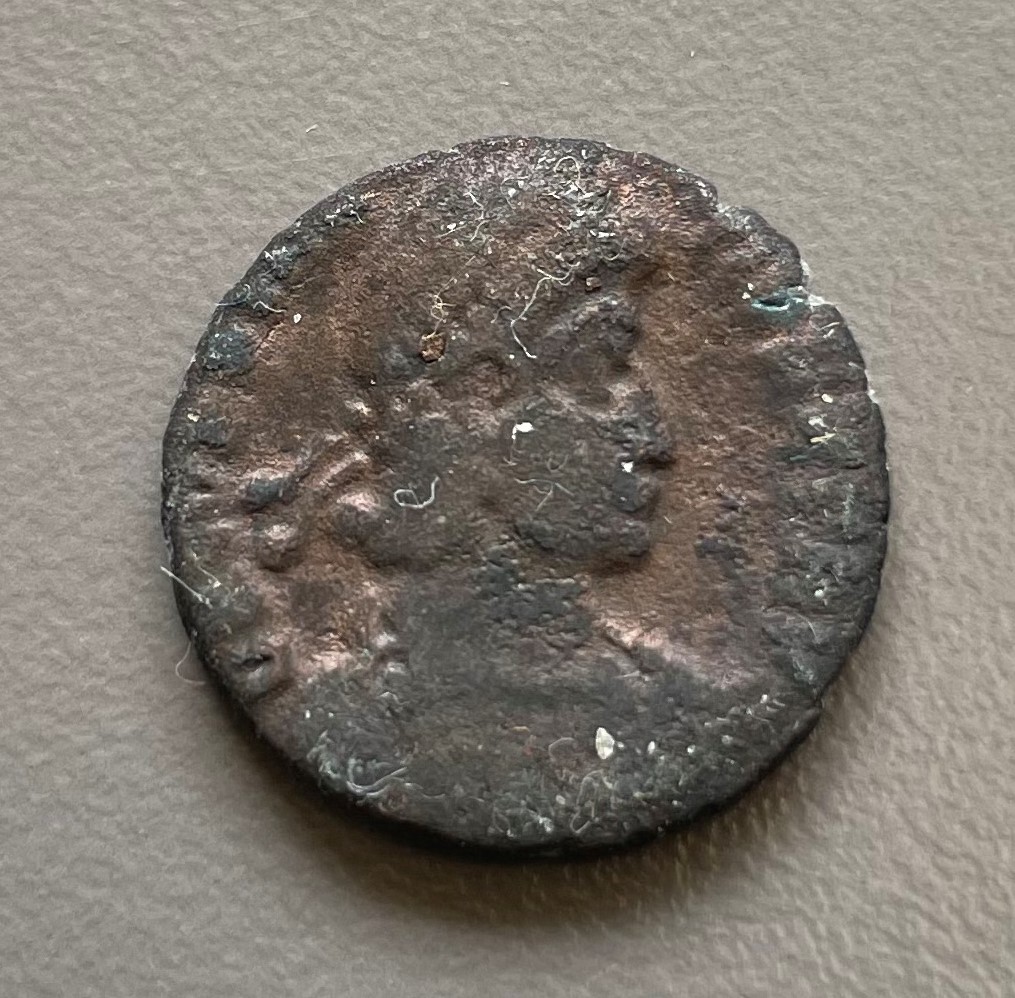 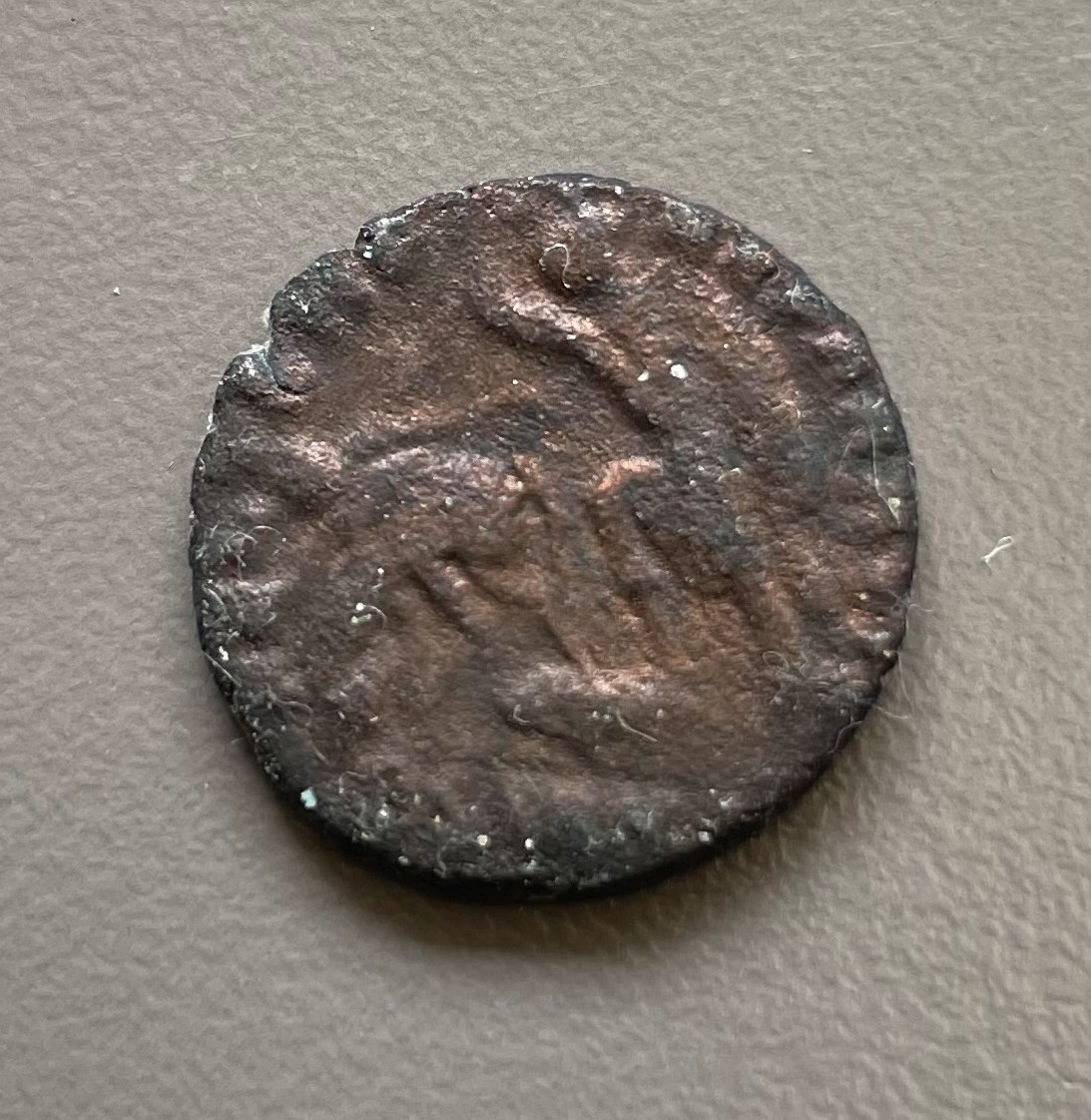 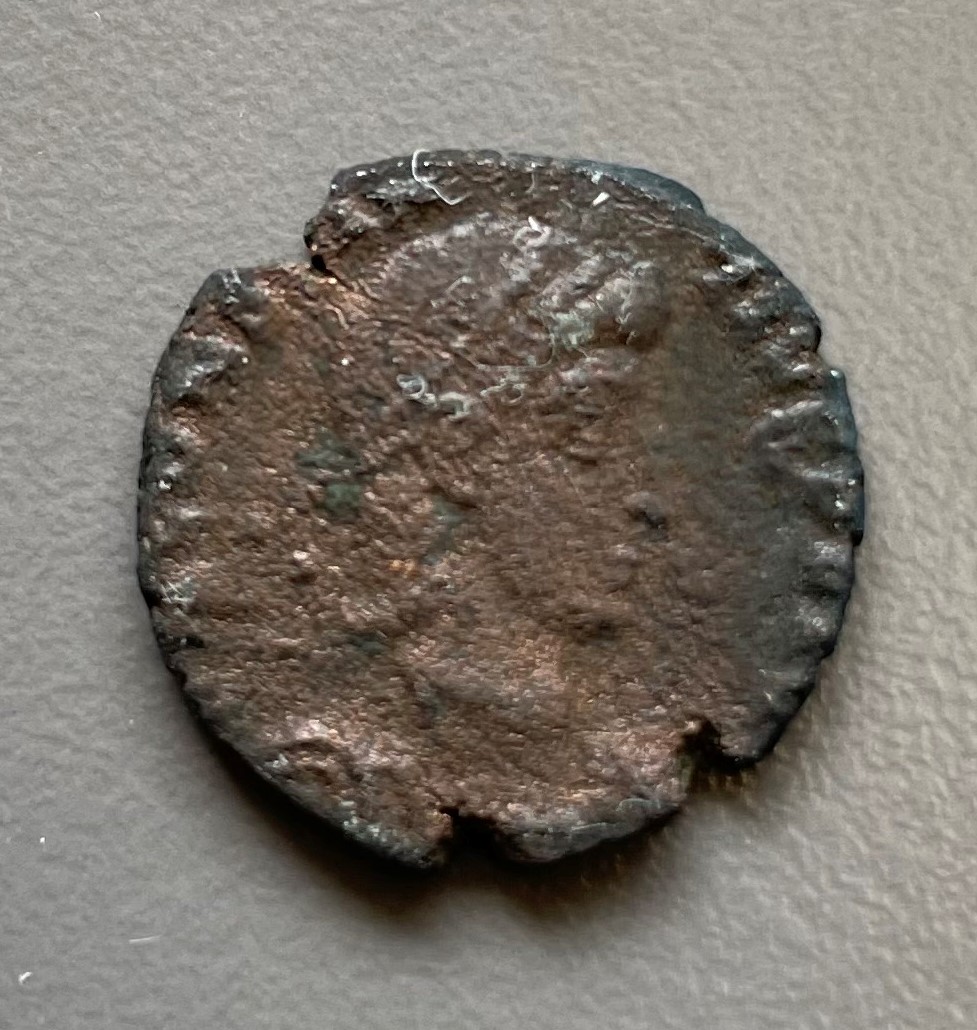 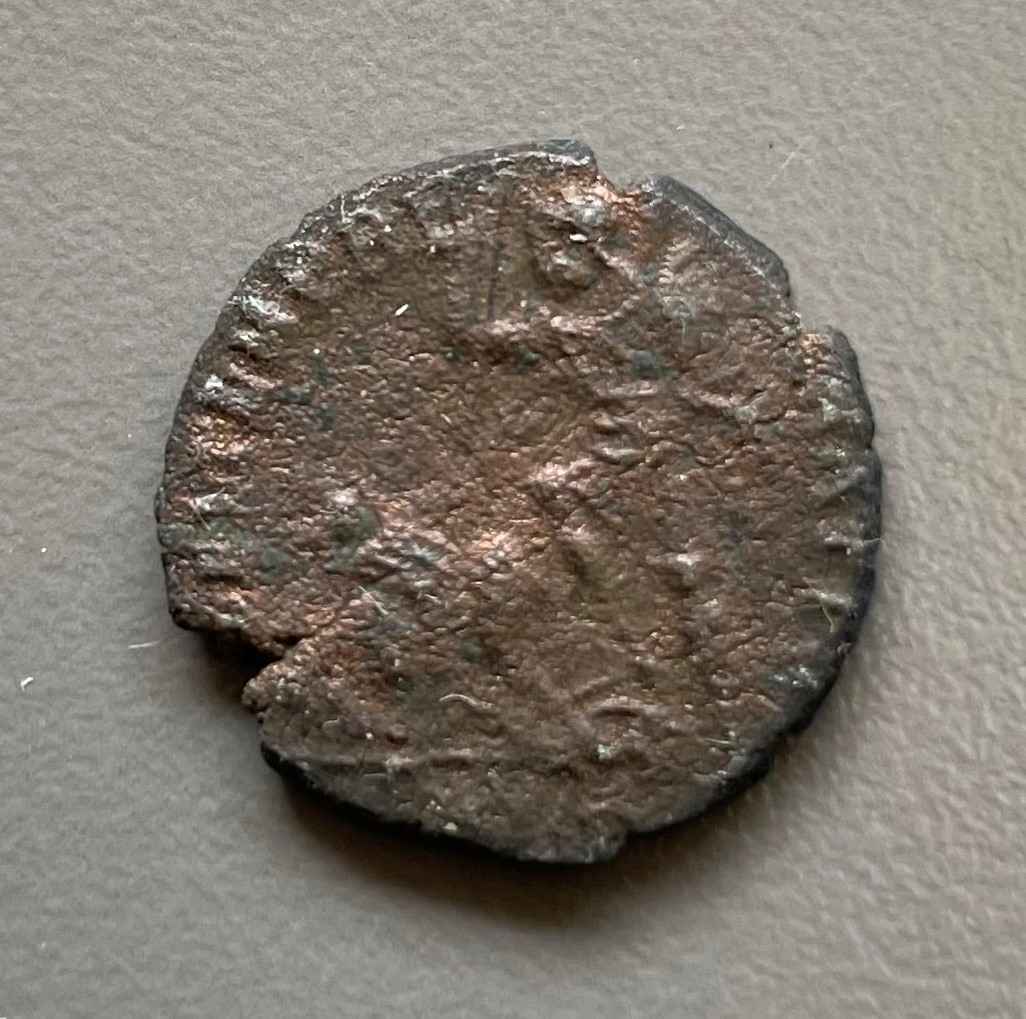 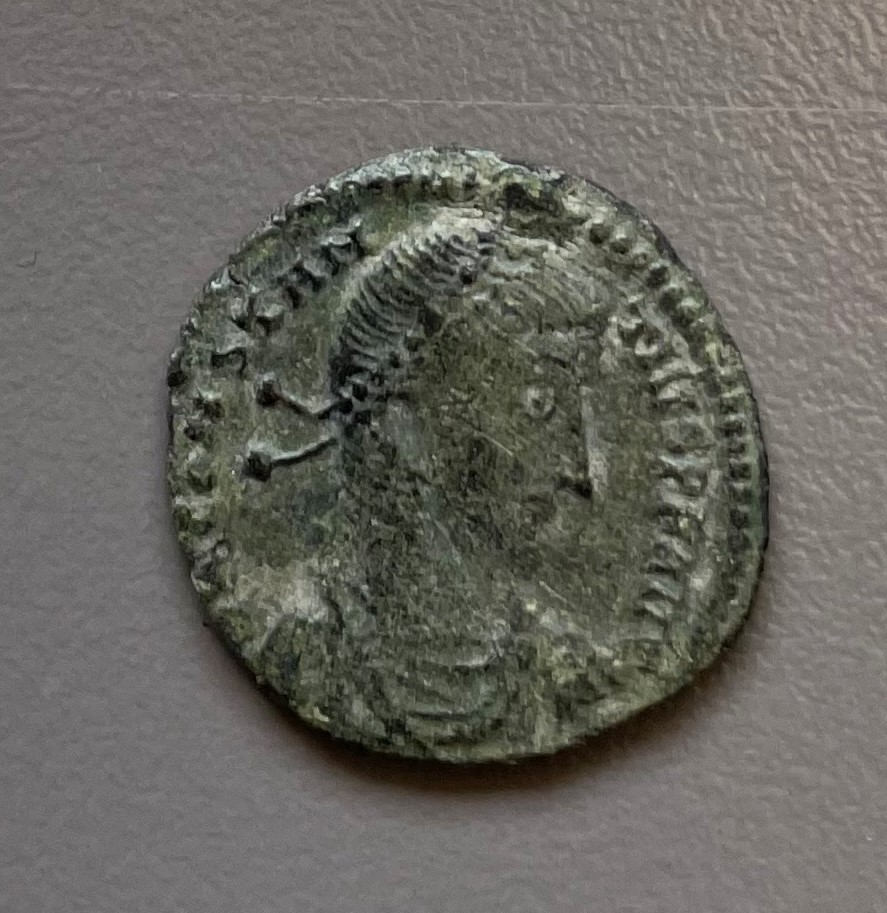 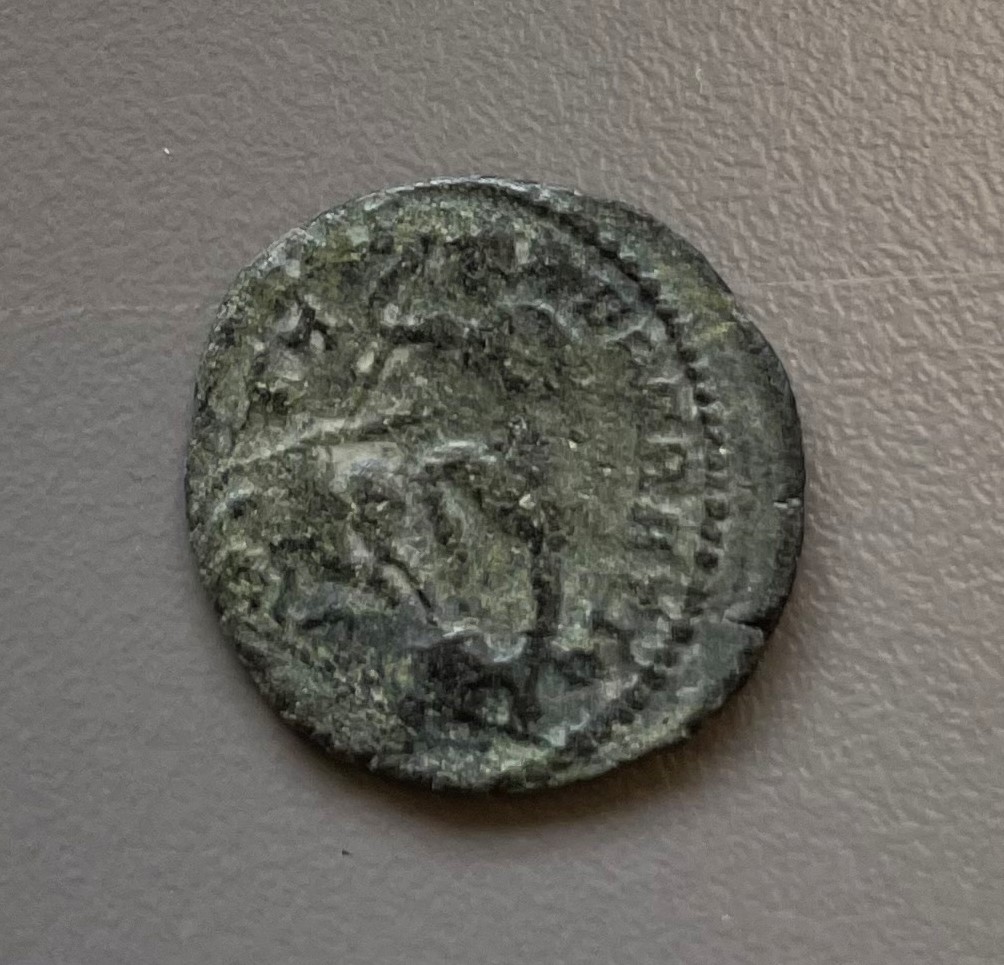 Each of the three bronze coins above are of Constantius II, who reigned from 337-361 C.E. Instead of religious figures on the reverse, these coins have a soldier on horseback conquering a kneeling captive with the inscription fel temp reparatio (restoration of good/happy times). Fel temp reparatio seems to be a rallying cry of sorts, representing feelings of nostalgia for earlier era’s of long peace. 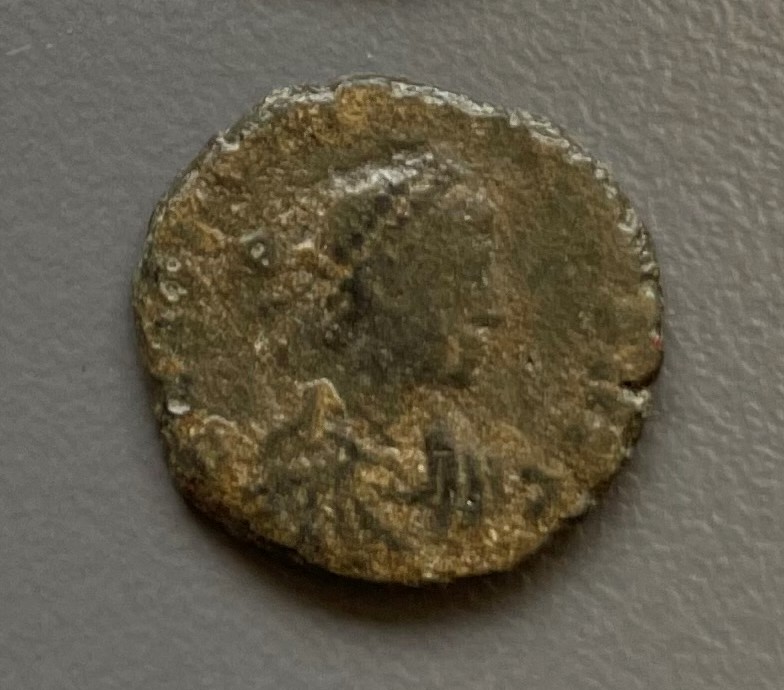 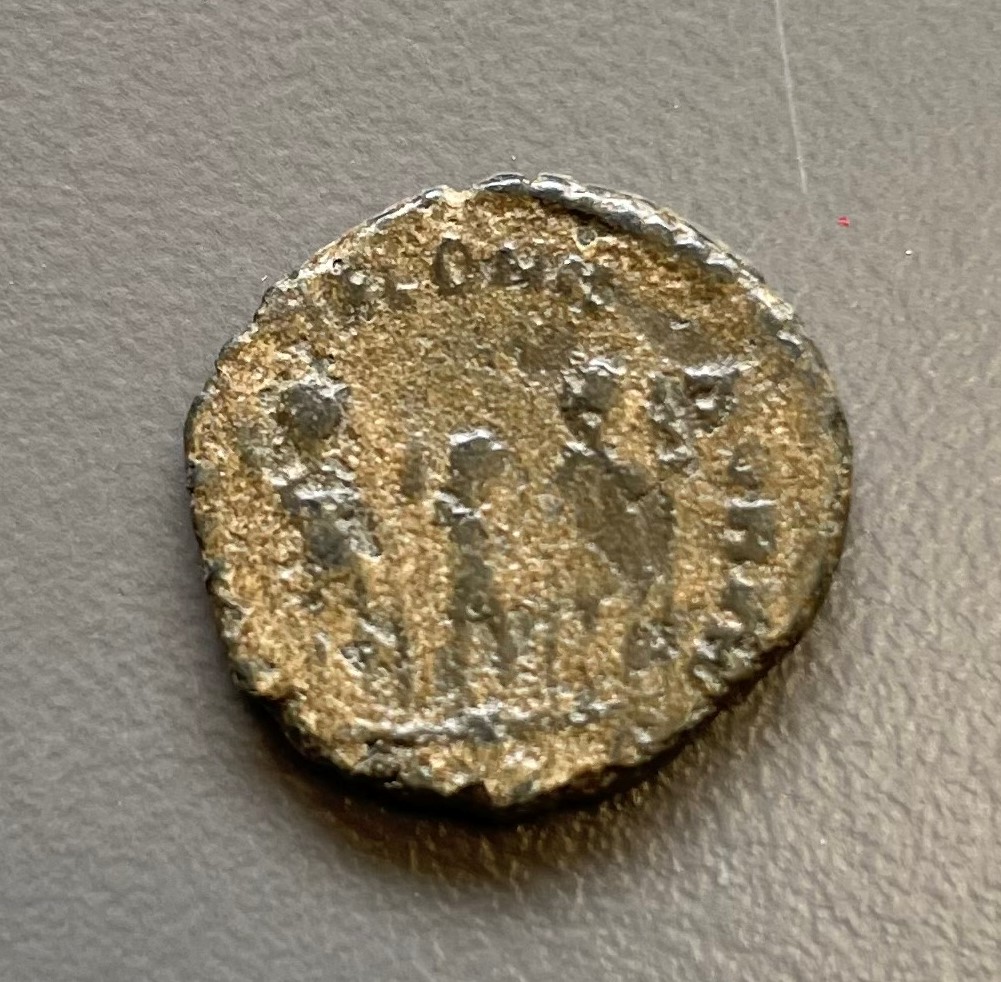 This coin of Emperor Honorius is unique in our collection––it is a copper As, the lowest coin denomination of the late Empire. The as was originally bronze, but by the late Empire, was switched to copper. Minted between 393-423 C.E.––also the time of his reign over the Western Empire––this coin shows the bust of Honorius, Arcadius (his brother, Emperor of the Eastern Empire until 408), and Theodosius II (Emperor of the East from 408-423). 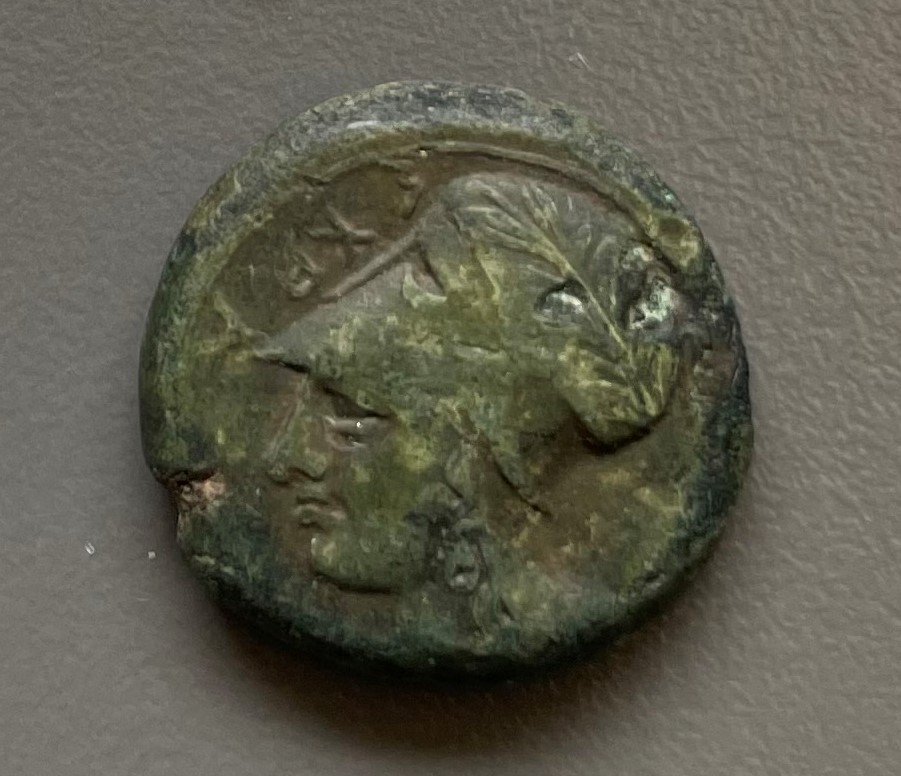 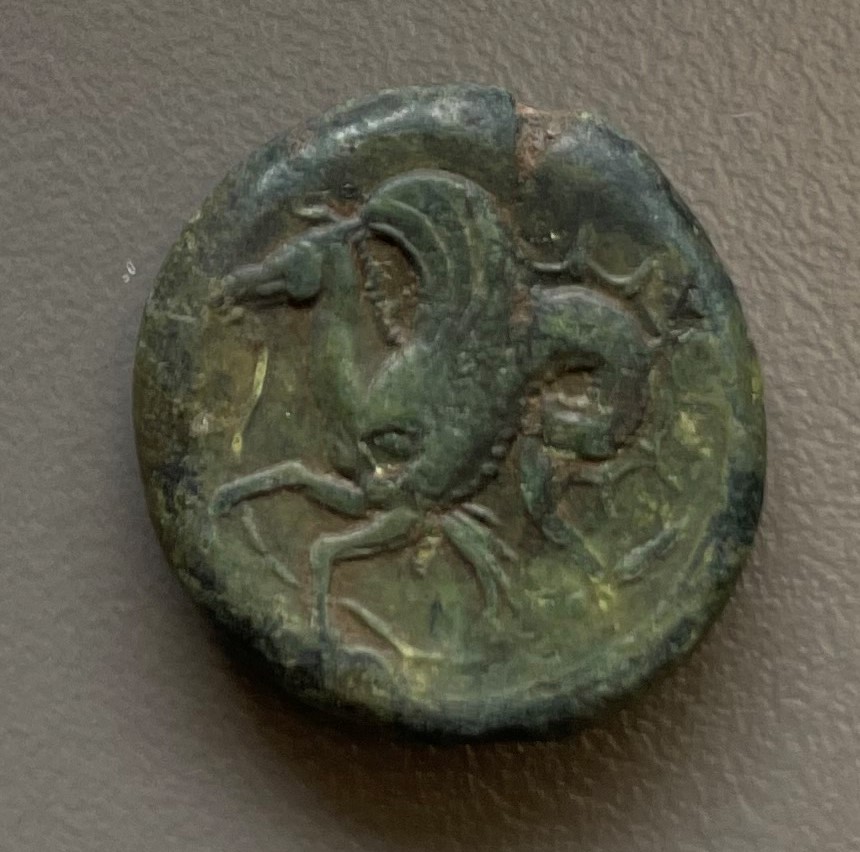 The oldest coin in our collection, this Greek bronze predates our earliest Roman coin by about 300 years. A bust of the Greek Goddess Athena appears on the obverse (heads) with a  hippocampus, a mythological creature that is a composite of a horse and a fish, appearing on the reverse. Gods, heroes, and other mythological figures are a common motif among ancient and classical coins. 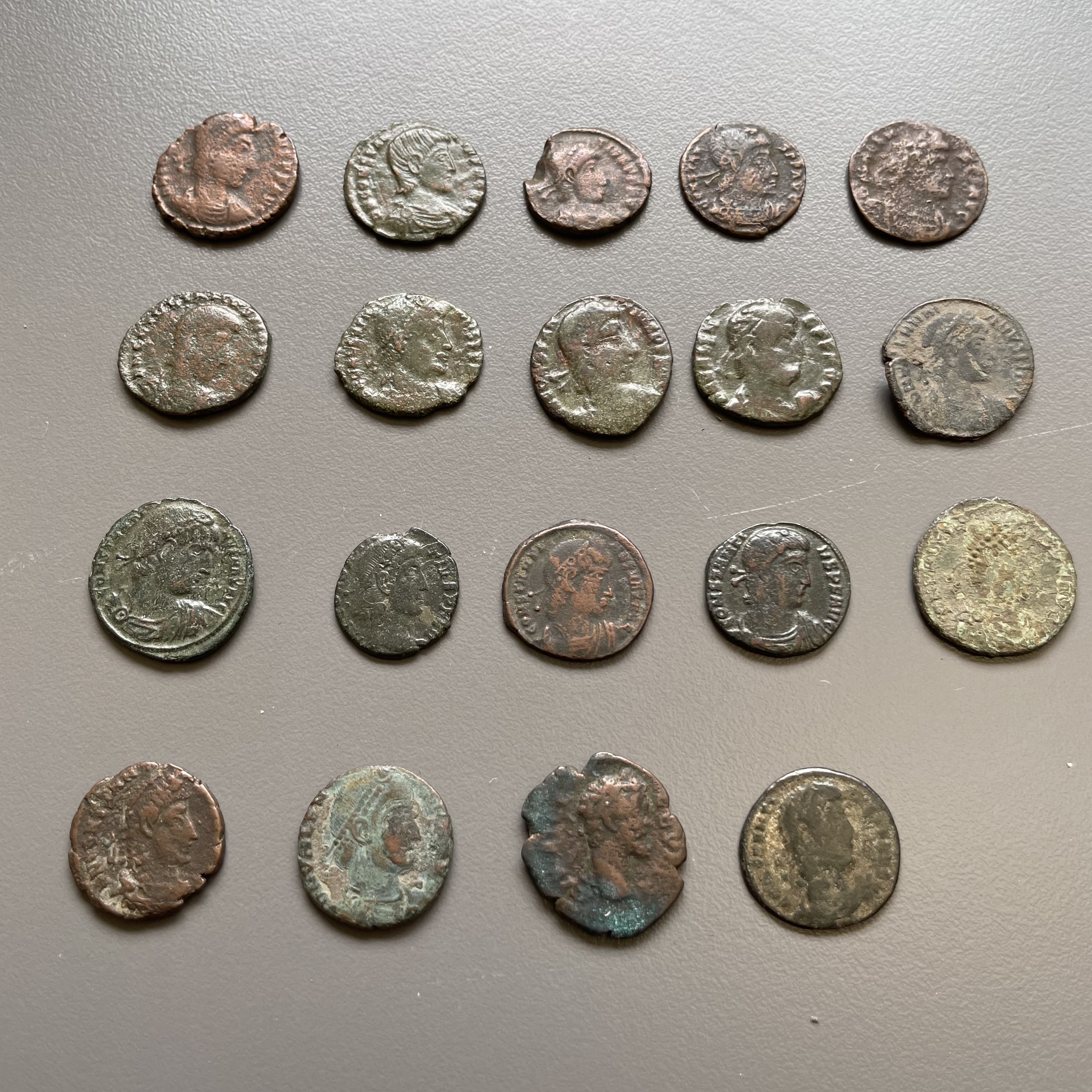 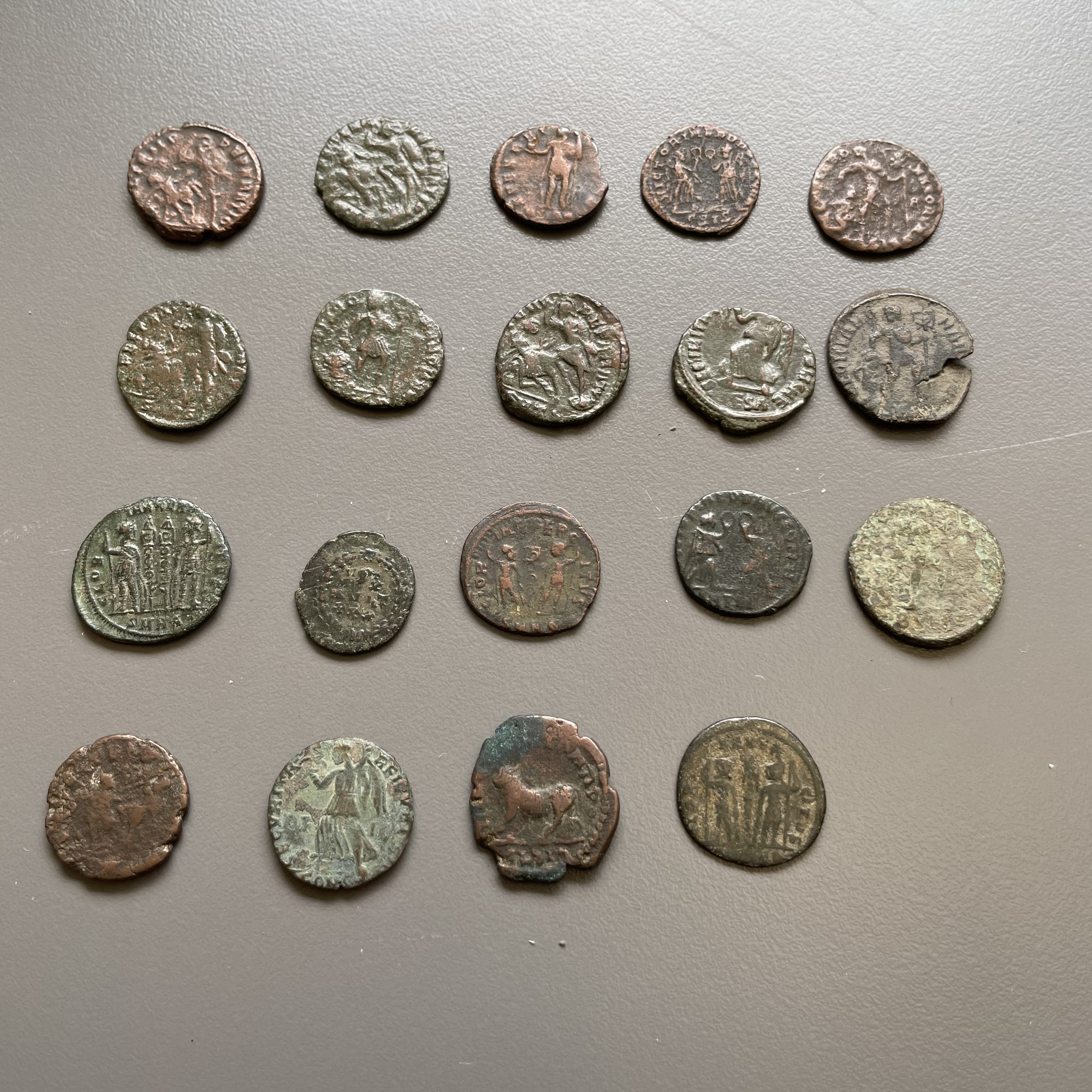 This collection of ancient bronze coins are all together in what is called either a cache or a hoard. A hoard is any collection of valuable artifacts--like coins and jewels, while a cache is one that has been hidden/buried. This collection is a cache.

Ancient Romans buried their coins for one of three reasons: as offerings to the gods, to store life savings in times of turmoil, or, in the late Empire, to simply dispose of worthless coins.

Ancient coins can be minted in two ways: casting or striking. Casting involved pouring molten metal––most often bronze––into an engraved cast of the coins, oftentimes making beautiful coins. This was, unfortunately, time consuming and expensive, because a cast had to be broken to retrieve a coin. Casting was popular among Eastern civilizations.

Striking, or hammering, is what the Romans used to produce their coins. A blank piece of metal (silver, bronze, or gold) was put between two engraved dies. A hammer would be used to strike the image on the die to the coin. The Romans were so efficient that upwards of 20,000 coins could be produced in a single day. Unfortunately, though many coins were perfect, this process led to some mint errors.

Such mint errors can be seen in two of our coins: one of the 3 Constantius II coins and the coin of Augustus and Mercury/Apollo. Both of these coins have a common mistake: the exergue, or dotted border, has come off-center of the blank disc.

For more information, go to “How Ancient Coins were Made,” The Art Institute of Chicago, https://www.youtube.com/watch?v=naA87x15MiU.

AE (For Greek Coins):
Designated by metal (AE for Bronze, AR for Silver etc.) followed by measure
(Ex: AE 13 would be a Bronze coin with a diameter of 13mm)

As— lowest denomination of Roman coins. The As was minted in Bronze until 23 B.C.E., where Augustus changed it to be struck from copper. It was frequently minted until the 3rd Century, during which it fell gradually out of use.

Sestertius— worth 4 ases, the sestertius was a large bronze coin. Due to its large size, It remained a highly popular way for emperors to commemorate their triumphs until its discontinuation in the 3rd Century.

Denarius––For many centuries, the Denarius was the standard coin of the Roman Republic and then Empire. It was a silver coin discontinued in the middle of the 3rd Century.

Aureus— standard gold coin of the Empire, first introduced by Julius Caesar. Discontinued in the 4th century by Constantine.

*All information found in the Guide to Ancient Roman Coinage,https://www.littletoncoin.com/webapp/wcs/stores/servlet/Display%7C10001%7C29555%7C-1%7C%7CLearnNav%7CGuide-to-Ancient-Roman-Coinage.html

Blank— the name of a non-minted piece of metal soon to become a coin.

Exergue— a space on the coin below the central design, usually delineated by a line.

Flan— another name for the blank coin.

Obverse - The front or head side of the coin.

Reverse- The back of the coin.

Hoard— an archaeological term that describes a collection of valuable wealth and artifacts. Hoards can be made up of almost any material, including coins, jewelry, and even cooking equipment.

NOTE: All caches are hoards, but not all hoards are caches. A hoard is the catch-all term for the collection of valuable objects, including coins, and can thus describe and be used interchangeably with a cache. A cache, on the other hand, typically refers to those artifacts which have been buried.

Casting: Pour molten metal into a cast to produce coins. Used primarily by Ancient Civilizations in the Far East.

Striking (or Hammering): A method to produce coins. A blank piece of metal (silver, gold) was set in between two engraved dies with the images on them. They would then be hammered, and the engravings would be impressed onto the blank. Tools for the striking of dies can be found here: https://maa.missouri.edu/sites/default/files/docents/greekromancoins_0.pdf.

FUN FACT: The Romans were so efficient at striking that up to 20,000 coins could be struck on a single day.

This document from the University of Missouri gives a brief timeline of the minting and disbursements of Roman and Greek coins. Also included is a short discussion of popular artistic motifs included on both Roman and Greek coins, namely: royal portraiture, religious/mythological scenes (such as the presence of a god or an item from mythology), and building projects. This source is especially helpful in understanding the art present on coins currently in our collection. I also used this to help identify possible mints, as the document provides a small list of mints as well as common abbreviations.

This source describes the technology used by the ancient Greeks and Romans to make their coins. The presenter provides several examples of ancient coinage technology as well as the terminology used to describe said technology. This source provides a good background for understanding exactly how the coins were made and is a good foundation for those interested in learning more about ancient numismatics.

This source gives a list of the most common coin types found in the Roman empire; their make, description, name, and time period minted. Though this source did not inform much of my research for our specific coins, it does include a nice table with the conversion rate between different coins as well as a brief history of each denomination of Roman coins. Popular coins as well as their conversion rates have been used and are now a part of our Glossary.

“How Ancient Coins were Made,” The Art Institute of Chicago, https://www.youtube.com/watch?v=naA87x15MiU.

This video is played as a teaching tool in the above source. However, due to spotty internet connection within the presentation, I have decided to include it as a second source. The video is complementary to the presentation because it shows the process in which ancient coins were minted––including a demonstration with real molten silver and a hammer and anvil. This source is a nice way to teach how the coins were minted and provides an insight into the realm of ancient numismatics.

This source describes how Roman coinage came to be and evolved. This is not necessarily a primary source, nor does it have as much information relevant to the coins in our collection. That being said, I found this source to be useful and interesting because it mentions the evolution of coins as well as contacts between Greek colonists and the Roman republic.

This presentation gives the background on Republican coins up through the death of Marc Antony with a specific focus on the coins of Brutus and Julius Caesar. While the artifacts showcased in this source aren’t from the same time period as those in our collection, this presentation nevertheless has important information regarding the purpose of ancient coinage. Mudd makes it a point to go over what it means that a portrait of a living Roman is put on coins and how that affects the reading of said coin. This source is excellent in learning how to read coins and how images might affect meaning.

This guide includes the names and descriptions of different motifs present on Roman coins. Also included is a quick translation guide to more common sayings included on the coins. This source is wonderful for those looking/interested in translation of the coins and helped me with some of the translations as well.

“Interpreting Roman Hoards” gives several theories and interpretations of the presence of Roman hoards. Reece breaks down the presence of Roman hoards as three distinct reasons: savings, religious offerings, and disposal for useless coins. This source is important as it lays the foundation for understanding the three most common types of hoards and what that means for the archaeological record of the Romans.

This web source sets out the different sizes and classifications of Roman and Greek coins. I used this to help with the construction of the glossary as well as clarifying the meaning of the size designation of our own coins. Without the glossary, this source would and is a perfect tool to understand the specific terms numismatists use.

This is a comprehensive guide to many of the abbreviations used on Roman coins. This source, along with the guide from the Littleton Coin Company, can help inform the inscriptions on each of our Roman coins. Swoveland’s guide is perfect for those wanting to learn more about inscriptions and translations.

This source uses quantitative data about the presence of coin hoards across the empire to determine population changes in the Roman empire. Turchin and Scheidel conclude that many of the hoards composed of later bronze coins— like those in our possession— coincide with times of great upheaval. Said upheaval includes, like the title suggests, population decline, but also fluctuations in coin price and political turmoil. This source is important because it helps to interpret our specific coin hoard while also allowing us to peak into the mind of a Roman.

“The Handbook of Roman Imperial Coins” is a great catalog of major coins released throughout the entirety of the Western Empire. This source also includes histories and typical faces of coins from each dynasty.

This collection of Greek and Roman coins has been acquired one or two at a time by the Transylvania University Classics Program in the early 21st century.  It is used in Classics and other courses at Transylvania.

This guide was created in the summer of 2021 by Ben Gallenstein, Class of 2022, for an internship with the Transylvania University Library Special Collections.